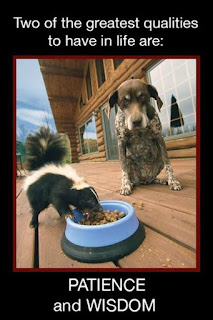 I'm sad to say the Curse of Chalfont was sidetracked by things that couldn't be helped. I hope to return and complete it by October of 2018.

Email ThisBlogThis!Share to TwitterShare to FacebookShare to Pinterest
Labels: The Curse Of Chalfont

Was The Mayor Killed? Part 5

"I saw Mayor Berger driving down the street when I was walking the dog. At the stop light, I waved, but he stared straight ahead. I noticed two - maybe three other people in the car." His name was Prescott Applegate, he had thick white hair and was holding a small white dog that was staring at the tall policeman."

"Two or three people in the car?" The cop raised an eyebrow.

"For sure there was one next to the Mayor in the front seat, and another person in the back seat. I thought maybe there were two people in the backseat but it was hard to say." 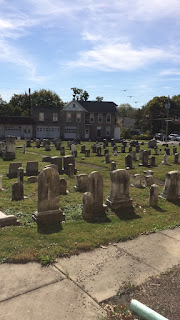 Lola was sitting at one of the tables, waiting for her turn to be interviewed. She had texted her grandmother that she would be late, nothing to worry about it. Lola was afraid to say there was a dead body (the Mayor!) and that she was going to be interviewed by police because her grandmother would no doubt rush over. Ethel watched all the murder mystery shows, Dateline one of her favorite, and had read all of Ann Rule's crime books. She fancied herself somewhat of an 'arm chair' detective and knew her way around the internet better than Lola did. She had not one, but two police/fire scanner apps on her i-phone and as much as Lola loved and cherished her grandmother, that scanner app squawking all the time was enough to drive Lola insane. Back in Illinois, in the small community they had lived in, nothing really happened, the app was quiet most of the time. But here in Chalfont, in Bucks County, there were many different police departments in the bigger towns and it always seemed someone was up to no good.

It was Ethel's internet sleuthing skills that found out that Janey - the borough secretary- was married to a corporate loan officer and Randy, the borough manager, was married to a real estate agent.
Ethel wasn't able to find much history about the apartment building they lived in, or the town, for that matter, but what she did find, was just enough to make her worry.

The door to the bagel shop opened and Asa walked in. Well, Lola smelled him before she noticed him; the cigarette smoke was infused through his clothes. No one else noticed him. Everyone was busy talking to each other, waiting for their turn, whispering things like, "It's such a shame." "He was a great mayor." "I can't believe it."

Asa spied Lola and made his way over. "Do you mind?" He gestured toward the empty chair at the table.

Lola was suddenly shy. In the light of day, Asa was quite handsome. A strong jaw line and a dimple in his chin.

"What happened? Was the place robbed or something? Are you okay?"

"I'm fine, thank you," Lola tore at her napkin, trying to keep her hands busy and her eyes focused on something other than Asa's deep green eyes. "I guess they found the mayor dead in his car in the drive thru lane."

"No shit," Asa said, then quickly apologized. "Sorry, I shouldn't curse around a lady."

Lola smiled and looked up at him, "Please, it's no big deal. About the cursing. Did you know the mayor?"

"Mayor Berger? Sure. He's been around forever. Mayor since 1976 I think.  David was probably in his 80's. Probably had a heart attack or something."

"That guy over there," Lola nodded toward Prescott Applegate, "said there were two, maybe three other people in the car with him earlier."

"Really?" Asa said.  "Well, I highly doubt anyone killed the mayor. He was very well liked...but..."

"But?" Lola stopped tearing her napkin apart and leaned closer to Asa.

Asa lowered his voice, "We're pretty sure he was being taken advantage of. He really is...er, was, a kind soul who saw the best in everyone. Other people have their own agenda now, it's not about what's good for Chalfont, it's about what is good for them. So they just gave him busy work to do, and keep him in the dark about all their plans."

The door opened again - bringing in a gust of wind so strong that it almost toppled over Lola's coffees and whisked the napkin she was tearing off the table.

This time, everyone stopped talking and looked up and over at the door.

It was pink haired Zane, wearing a fluffy long blue robe that had little stars all over it. He was wearing pink bedroom slippers that were shaped like swans.

"I saw two men getting into the mayors car this morning. The mayor was at the cemetery and two guys, wearing long dark coats were talking to him, and then they all got in his car. I just heard he was dead and knew I had to come tell you!" Zane was excited, breathless.

"How did you know he was dead?" The cop asked.

"I told him." Ethel walked in behind Zane.

Lola covered her face with her hands and groaned.

"And how did you know?" The second cop in the bagel shop asked.

"When my grand-daughter texted me she was running late and I saw all the police cars pass by, I turned on my scanner and heard the news. Then as I was walking down here, I saw Zane in the hallway and told him." Ethel seemed to proud, boasting.

Lola removed her hands in order to explain that the white haired energetic lady was her grand-mother.

But Asa was gone.

He had scribbled on a napkin, "Hate crowds. See you later."

Ethel spotted her grand-daughter and was making a bee-line for the table.

Lola folded up the napkin and tucked it in her purse.

The Curse of Chalfont